Why is night vision green 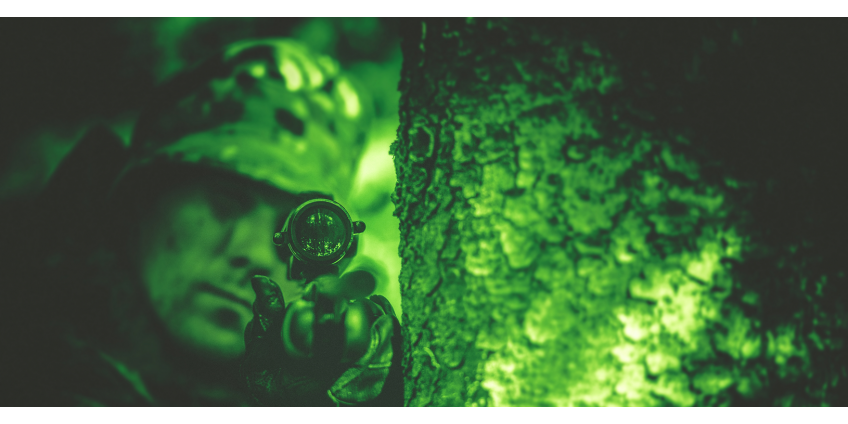 Night vision technology has a variety of uses in both the civilian and military sector, as it can be used for security, surveillance and for numerous outdoor activities. Nightvision was first developed for Military use in the 1940s and was readily utilized during Military conflicts in the Korean and Vietnam wars. These devices were quite large and cumbersome but were cutting edge technology that empowered militaries the first advantage of seeing in the dark. Some of the first images that come to mind when hearing the topic of NightVision is the green color of the visual field. This article will provide some backdrop on the development of night vision, as well as the reason for the green field of view.

Invention and Progression of Night Vision

These “Generation 0” devices used active infrared to brighten up a scene. Soldiers carried an IR illuminator to shoot a beam of near-infrared light that then reflected off objects and bounced back to the lens of their scope and created a visible image of what they were looking at. The illuminators used by the German Nachtjägers, or "night hunters", were about the size of dinner plates and required a large power supply carried on the soldier’s back.

The technology made huge leaps in the following decades, and by the time the U.S. entered the Vietnam War, many troops were outfitted with passive "starlight scopes" that used image-intensifying tubes to amplify available ambient light (usually from the moon and stars, hence the name) and produce an electronic image of a dark area.

Technology behind Night Vision, why is it Green?

It maximizes the amount of light received from natural sources such as starlight or moonlight and “amplifies” it in night vision devices so that we get as clear image as possible. Unfortunately, this means that night vision goggles with this technology can’t work in complete darkness, since it actually doesn’t amplify the light, rather it illuminates it up to a level at which the human eye can detect it. When photons hit the lens at the front of night vision goggles, they are still carrying the light of all colors. But when they are turned into electrons, they lose that information and incoming color light is turned into black and white. But why is night vision green then?

The main reason is that image intensification screen inside the device is made of phosphor. This substance is used because of its luminance effect and when struck by electrons which don’t carry color information it glows bright green. As the electrons pass through the tube, they flow through a microchannel plate, which is a disc with millions of microchannels. Striking these microchannels bursts of voltage cause the motion of electrons to increase rapidly, forming dense clouds of electrons that intensify the original image. These same electrons then strike a screen coated w/ phosphor at the end of the tube, the energy from these electrons creates the greenish image on the screen inside the device. Green phosphor is used because the human eye is most sensitive to the green color pallet, and able to distinguish more shades of green than any other color.

Nightvision has made significant advancements in size, clarity, visibility and price over the last 70 yrs. With continual advancements in technology, there are several breakthroughs that are in development and will be exciting to see where the industry of night vision goes.