Smith&Wesson. A legendary firearm and an NVD for it. 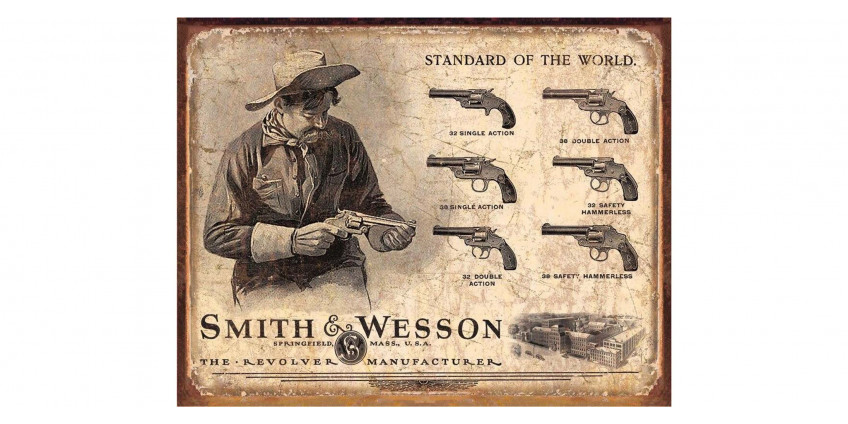 The swivel joint that connects the frame to the barrel with the right-hand rifles inside is secured by a latch. The tubular axle carries a metal barrel with cams, and the latch spins the toothed wheel, gripping the bar with serrations and extending the extractor from the barrel. After completing nearly a full turn, the wheel is released from the latch, and the spring returns the ejector to its former position. This is all a fairly rough idea

of the extraction scheme patented in America a hundred and fifty years ago. Simply put, it is our usual Smith & Wesson revolver barrel, loaded with six brass cartridges, smokeless powder, and a lead-free bullet. The patent for the revolutionary idea, invented and patented by Rollin White, of boring a revolver cylinder and using metal cartridges was acquired by Horace Smith and Daniel B. Wesson in the mid-nineteen nineties. It was a breakthrough in the gun industry. Six rounds, six seconds to fire. With a reload, twenty-four shots in one hundred and twenty seconds. A new round for developing an entirely different quality of the weapon. In a country that preaches democratic growth, family values, peace, prosperity, and love of neighbor. How not to recall in this context the statement of Benjamin Franklin that "democracy is a contract of rules between well-armed gentlemen. I would like to add a modern interpretation of the statement about guns and good neighborliness.  It goes like this: " With a kind word and a gun, you can accomplish much more than just a kind word." It's all about the cool gunsmiths who created the Smith & Wesson guns.

A brief history of the company.

The Smith & Wesson Company was born out of friendship. Young, advanced Daniel B. Wesson and Horace Smith, near the end of the nineteenth century, took their first steps associated with the gun trade in Springfield, Massachusetts. Their first lever-action pistol business was registered here, which had to be sold due to financing problems. It was bought, by the way, by a shirt-making company, which at the time was headed by Oliver Winchester. After some time, the friends began to develop a new revolver and cartridge, calling this combination "Smith & Wesson." Later, fate brought them together with Rolin, with whom they later signed a contract for the exclusive use of his patent to manufacture revolver cylinders with drilled holes. This was a historic contract that enabled the unilateral production of this technological marvel for ten years.

Moreover, lawsuits were filed against all gunsmiths who tried to develop metal cylinders and cartridges to circumvent the patent. From then on, only the gunsmiths of his company developed and improved their weapons. A small-size revolver was produced, equipped with the company's patented Rimfire cartridge, thus becoming the first in the world to have a cartridge-loaded weapon. At some point, getting vast amounts of money with less cost bribed Smith & Wesson. It became heavily involved in arms exports, switching to lucrative and lucrative overseas contracts. Nothing passes without a trace. The company has made room in the domestic market by breaking into the arms market outside the United States. And, as you know, a place is never empty. Soon, returning its segment to the U.S. arms market, the company had a tough time. At the end of the 19th century, one of the company founders, Horace Smith, gave his rights to his companion Wesson and went out of business. And in the seventies of the last century, the company was purchased from the Wesson family by the conglomerate Bangor Punta. By the end of the previous century and the beginning of this century, Smith & Wesson was owned by the English engineering company Tomkins plc. A difficult period came in the 2000s, when it was the only firm to enter into an agreement with the US administration that imposed restrictions on the sale and distribution of its products, causing outrage, shock, and incomprehension on the part of gun rights groups and clubs. They announced a boycott on the purchase of new Smith & Wesson designs.  The result was the closure of two factories and a 40% drop in sales. In this state, Smith & Wesson was sold to the Saf-T-Hammer Corporation, which publicly reneged on its earlier agreement. That company was later resold to Smith & Wesson Corp. Eventually, maintaining its age-old tradition and historical value, the company changed its name to Smith & Wesson Holding Corporation.

This firm has many designs for reliable, handy, and trouble-free weapons. The most significant is the Smith & Wesson model no-smoke revolvers and revolvers, which are in service with some armies of the world and police agencies to the present day. It is a Model 38 Military and Police revolver, now called the Model 10, which was used as the basis for the development of the in-house designed thirty-eighth caliber cartridge. The Military and Police revolver is good in terms of reliability with a locking cylinder on a monolithic frame. During World War II, this weapon, with a converted cartridge for the British thirty-eighth caliber cartridge, was supplied to that country under the name "Smith & Wesson 200 British Service", producing two million pieces over eight years. It was later called "Model 10" with interchangeable barrels. Attractive models from this range are the lightweight, short, stainless steel "Military and Police Airweight" and "Military and Police Stainless."

Special mention should be made of the company's use of Magnum ammunition. At the beginning of its development, Smith & Wesson directly related to it, manufacturing 357 "Magnum" cartridges until the forties of the last century. Later, the world's best revolver, "Smith & Wesson" 29, was produced under the powerful cartridge 44 "Magnum" by "Remington."

It should be noted that the main focus of activity was narrowly-specialized - the development and production of revolvers. Pistols were not produced for many years. It was built in two caliber revolver cartridges before WW2, but it had some experience in this area. The guns were expensive, imperfect in design, and were taken out of production, and the company suffered losses. After this unsuccessful experience, the company abandoned the "pistol" theme for many years. Despite this, the ambition and business reputation of Smith & Wesson did not allow the idea to be forgotten. "Better late than never," the management decided, and after analyzing the past mistakes, produced the Smith & Wesson .41 target automatic pistol of the twenty-second caliber with good performance. In the mid-sixties, the Smith & Wesson 39 pistol was made, including many other manufacturers' handy innovations. For example, there was a safety in the rear of the bolt like the German "Walther," which looked much like "Browning Hi Power" and others. It was decided not to experiment with the cartridge, either. It used a classic at that time nine-shot "Parabellum" cartridge. Subsequently, this gun was supplied to the US Navy and Special Forces. After that, the model underwent several upgrades. One is that the single-shot magazine was enlarged from eight to fourteen rounds. The company made a new submachine gun in the seventies, hoping to replace the Israeli Uzi and HK MP5. It turned out to be an inconspicuous weapon with a hinged buttstock and a limited number of rounds.

NB - a gun description, where to use it, and general recommendations on the NVD.

Given the "appetites" of the company, it was natural to assume that the subject of shotguns would not pass unnoticed. Here the way was simplified by purchasing the technology to produce a 12-gauge shotgun from scratch - from the patent with the documentation to the tools. In the process, three versions of shotguns were produced. One model was defective, including barrel rupture. Some were rejected, and others replaced some models. After all these events, the company left the shotgun market in the mid-1980s.

In the early nineties of the same century, Smith & Wesson introduced the S&W automatic assault shotgun. And at the beginning of this century, it entered the market again with two types of shotguns - the 1000 series and the Elite series. The 1000-series was on the market for about three years before closing. The Elite pistols were back on the market for about three years, and now it is worth looking at for a closer look, as it offered an unheard-of warranty on this type of shotgun. Lifetime warranty to the first purchaser and after his death to the heir he chooses!

The gun has been tested on stands and in the field by experienced hunters and amateurs.

Last year, the company entered the market for the first time with the Model M&P12 bullpup shotgun. This four-pound solid and comfortable classic pump-action shotgun with two different tube magazines is equipped with self-loading and unloading of standard buckshot cartridges, three-inch Magnum cartridges, and the option of a minigun cartridge. Two-way, right-handed, and left-handed shooter with safety selector. M-Lok mount on the barrel jacket makes it easy to attach/detach sights, flashlights, lasers, and other accessories. With these guns, it's a sin not to think of gadgets that will make hunting even more accurate and huntable. For this purpose, a collimator sight at a distance of up to one hundred meters is just the case. When choosing it, remember the so-called "muzzle energy," which can bring down the aiming mark and "destroy" the sight if you decide to save money and buy it from unverified manufacturers.

Do not forget about the "cheap fish." The second point for a powerful smooth-bore gun does not save money and buy a model in the case with a bracket, which will avoid problems with fixing elements. It is a matter of taste to buy a closed or open collimator sight. However, open sights tend to get blocked more by snowfall and snow drifts than closed ones. In this case, the sighting angle will be narrower in the second option.  If you are a fan of night hunting, then refusing night vision sight, you will have a great chance to stay without a trophy. It does not make sense to extend the distance of more than a hundred meters with a smooth-bore gun at night. Therefore when choosing electronic-optical sight, taking into account the relatively short distance of night hunting, you can buy cheaper models, not the latest generations; moreover, you can purchase telescopic sight. Let us summarize. It is possible to use the sight of the first generation, which will work well up to one hundred and fifty meters. But it is necessary to discount the muzzle energy of the weapon, and first-generation sights do not always cope with it. Maybe a digital sight, which can handle any recoil, will suit you.

Analyzing the work of Smith & Wesson, we see that during the century and a half of its history,y it rarely knew any crisis. It is an example of a successful business based on weapons production and a competent marketing policy.

Or maybe the company's other products are no less profitable than the main one? There is something to learn from. "Smith & Wesson" sells a diverse line of knives - from pocket knives to survival knives, gun accessories, handcuffs, safes, clothing, watches, collectibles, tools, air guns, emergency light panels, cologne, bags, and washing machines. Under a licensing agreement, it began manufacturing "silent" bicycles and a line of tactical shoes for the police. And of course, how without charcoal grills, a whole series of which were released and named after pistol cartridges, such as "500 Magnum", "38 Special," and the like.