How to use a mil dot reticle scope for range finding? 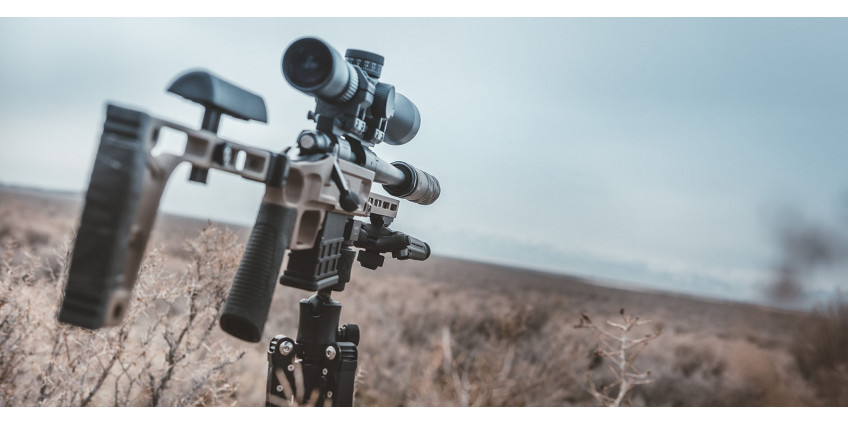 Mil-dot is a handy grid that helps you find the approximate distance to an object. This information helps users make adjustments and aim well, improving shooting accuracy. To truly appreciate the benefits of mil dot, it is enough to explore the available options for its application in practice simply.

Mil-dot is a unique reticle that comes as an addition to various scopes. With its help, you can easily calculate the height and width of an object and determine the approximate number of meters to it. This data allows you to make horizontal and vertical adjustments without changing the original scope settings. In addition, the availability of such information helps to calculate deviations from the optimal bullet flight trajectory resulting from the impact of various external factors (precipitation, wind).

Mil dot is short for milliradian dot. Milliradian is a dimensionless unit of measure equal to 0.001 radians (the angular value of an arc whose length is equal to its radius). At this interval from each other, the marks on the mil-dot reticle (MDR) are located, allowing you to estimate the distance to a live target and make adjustments to improve shooting accuracy. Such amendments increase the chances of successful completion of the case, even in installing sights that are not intended for firing from a very long distance.

MDR has found wide application in the military and civilian fields. This has become available due to the ease of operation and obtaining the necessary information in the shortest possible time. MDR provides a radian measure of an angle instead of a degree measure. This is done to make it easy to convert milliradians to decimal units. The milliradians are present on the reticle, helping gun owners get a lot of important information.

MDR has vertical and horizontal lines that intersect each other at right angles. They contain dozens of dots or strokes, the interval between which is one mil. During aiming, the halfway mark is combined with the edge of the observed object, after which milliradians are determined. This data helps to calculate the size of large and small animals, determine a person's parameters, and find the approximate distance between them. For these purposes, simple standard formulas are used, according to which even children can make calculations.

With an MDR on the scope, the sniper can adjust the bullet's trajectory. It must align the halfway mark with the desired point and then deviate by the required number of milliradians in a specific direction.

How to use mil dots in a scope?

Calculations with MDR are a slightly outdated method of finding distance. Despite this, it is actively used by lovers of the classics who do not want to spend money on purchasing special devices that can do this job. Often the latter are reliable and durable devices. At the same time, any failures in their work or a complete loss of equipment will force the user to finish the hunt or perform a military task. A similar problem does not occur when using MDR, so it remains relevant to this day.

In most cases, MDR is used to determine the distance. To do this, the sight owner needs to perform several standard actions and remember the school math course.

The correct sequence of actions:

Consider a situation where a hunter sees a large deer and wants to determine the number of meters to make an accurate shot and get the desired trophy. He points the sight at the lower part of the animal's body to achieve this goal. He determines the mils that the artiodactyl occupies by the MDR (for example, four milliradians). Then he divides the average height of a large deer (approximately 1.2 m = 1200 mm) by four mils and gets a result of 300 m.

In some situations, the owner of an MDR sight knows the distance in advance (measured with a particular rangefinder or any other similar equipment), but it is necessary to determine the exact dimensions of the target. It is enough to substitute the numbers in the inverse formula in this situation. According to her, multiply the distance by milliradians. The final result is obtained in millimeters, after which it is converted into the required units of measurement.

Using some assistive device, the hunter determined the distance to the deer, which was 420 m. On the MDR, the height of the animal is three mils. By multiplying one number by another, a value of 1260 mm (1.26 m) is obtained, which is the height of the deer. Similarly, the length of the animal's body is determined. For example, 420 m distance to an object is multiplied by six mils (occupied by a deer per mil dots reticle) to get 2520 mm (2.52 m).

When shooting at long distances, do not forget about the decreased inaccuracy due to the gradual deviation of the bullet's trajectory during its flight. Such an error arises due to the influence of external factors (wind, precipitation, etc.) and the forces of attraction and friction. To pre-calculate the magnitude of the deviation, you need to study the weapon's characteristics and the features of the bullets. Next, open the ballistic calculator and enter the data. The result will be the number of milliradians that must be deviated from the optimal mark while aiming to eliminate the bullet's flight error. An alternative to the ballistic calculator can be unique tables, which can also determine the amount of deflection.

For example, in calm weather (wind speed is 0 m/s), a hunter wants to shoot a deer that is 300 m away from him. To do this, he takes a Winchester, caliber .308, and standard RWS KS bullets weighing 10.7 g. The ballistic characteristics of the latter are available in reference tables, which are not difficult to find (there are many open sources of information). According to these data, while flying at a distance of 300 m, the speed of the bullet drops from 800 m/s to 556 m/s, and a deflection of 570 mm occurs. To make adjustments, raise the weapon until the desired point of impact of the bullet is about 1.9 milliradians (determined by a ballistic calculator).

Of all existing grid types, MDR is the simplest and most popular. It allows you to estimate the size of the observed object and its distance in a short time and make the necessary corrections before pulling the trigger. This feature made the MDR in demand among the military, who use sniper rifles, and civilians fond of hunting small and large animals.