Colt. The legendary weapon and NVD for it 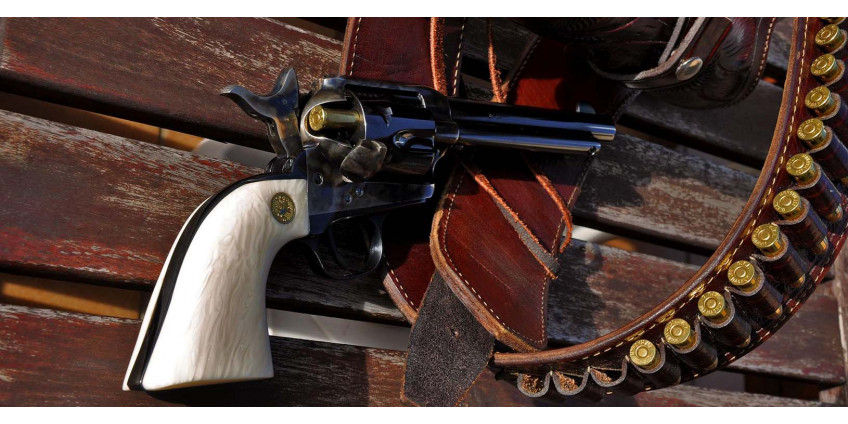 Seventy-four years of unchallenged official service until the early part of this century in the special units of the US FBI, its extradition to Great Britain during the First and Second World Wars, the formation of the Haitian National Police with its help, extradition to Iran, Canada, Nicaragua, Norway, Russia, El Salvador, the former USSR, France, Germany, Estonia, Japan, South Korea, and South Vietnam, to Lithuania after it declares independence. It is America's national symbol, comparable to the fame of the Harley-Davidson motorbike brand and Marlboro cigarettes.  It is the Colt M1911 pistol. A gun with a centuries-old history, powerful, designed primarily for self-defense, easy to maintain, effective, and affordable. A brand that dates back to 1855, when American Samuel Colt, manufacturer and founder of Colt's Manufacturing Company, uttered the immortal phrase: 'God made men, Colonel Colt made them equal. This was partly true of the great gun, but the gunsmith's ego, it seems to us, was unaffected.

Brief background history of the company.

Colt engineers manufacture and distribute firearms. At the time, the company's first designs were intended to replace existing one-shot pistols. While Colt has not invented the revolver concept, its designs were successful. In 1890, he received his enhanced revolver design's first two US patents. During this period, he established his first company, the Patent Arms Manufacturing Company, where he produced the Colt First Model underlever revolver. The Colt-Paterson pistol also came onto the market. This development phase brought more negatives than positives. Manufacturing spare parts for rifles was a new activity, and the Marines who experienced this innovation complained about the quality. This led to the company's liquidation.

Sometime later, during the Mexican-American War, Colt resumed manufacturing. By coincidence, he was approached by Samuel Walker, who offered upgraded versions of his revolvers. As Colt did not have production facilities, he rented them from the Whitney gun factory in Connecticut, where he produced his revolvers under Colt Walker. A few years later, he founded a company called Colt's Patent Firearms Manufacturing Company in Hartford, Connecticut, where the first production facility was built, which later grew into a large manufacturing plant called Colt Guns. By the mid-1990s, the new company's achievement was unprecedented. It was the first company to use advanced technology to produce interchangeable product parts. This success led to the decision to open a gun factory in London. In London's Hyde Park, Colt had an advertising campaign. Colt disassembled ten guns, mixed all the parts, and reassembled as many to demonstrate their interchangeability. At the time, it was an unprecedented spectacle. A factory was opened where parts were mass-produced and reassembled on an assembly line, a first in England. Despite its popularity, Colt closed the London factory and returned to the United States. There he lost his sense of luck for the first time. His employee Rollin White proposed a revolutionary innovation: drilling holes in the revolver cylinder and manufacturing metal cartridges. Previously, to load a revolver, gunpowder would be poured into the cylinder, wadding would be inserted, and the lead bullet inserted. The idea was rejected, and White was soon fired. White applied for a patent for his invention and then signed a contract with Smith & Wesson to use guns. The American Civil War brought prosperity to the Colt Company. Thanks to large orders for rifles from the government, the annual production of muskets and pistols rose to one hundred and fifty thousand. Within two years, more than two hundred thousand of a single model of the military revolver were sold. While becoming America's first industrial magnate, Colt was never able to correct his mistake of 'embedding' the cartridge in the cylinder. US law does not permit infringement of Rollin White's patent.

After Colt's death, his friend Elisha King Root took over. It was then that fortune turned its back on the gunsmiths. A fire destroyed the factory, burning guns, gears, and all the developments. Management changed. More than half of the workers were fired, no new orders came in, patents were nullified, competitors began to produce similar weapons, and old technology gave way to a metal cartridge, the manufacture of which was prohibited by White's patent and to buy a license for more than a million dollars would have been a complete folly. Colt's engineers began working to develop their model pistol on the cartridge. At the same time, after changing the name, the company went into consumer goods production. Colt returned to work after the patent expired, and Rollin White unsuccessfully litigated to extend it. Shortly after, he acquired the Derringer Company, which made pocket pistols. And in the early nineties, the prototype of a breech-loading gun was manufactured. It received patents for its manufacture, but with its small magazine capacity, it did not arouse much buyer interest. The army needed a reliable weapon of impressive caliber. So Colt created the Colt Single Action Army pistol, known as the Peacemaker and still in production today. At the beginning of the twentieth century, Elizabeth Jarvis Colt, heiress of the controlling interest, sold the company. It was the beginning of the Great Depression and challenging times for the company. It again began selling office equipment and computers, reduced the work week, and cut wages but could not avoid bankruptcy. At the beginning of the twentieth century, the board of directors decided to merge, and the conglomerate was named Colt Industries. In the 2000s, the company had a "second wind" due to the intensification of the American war effort in Vietnam. A Colt M16 model pistol was made for the army, which produced and sold about five million. It did not help.  The end of the twentieth century brought bankruptcy for the company, which the government, shareholders, and creditors could not prevent. And soon, the Colt company was bought by Zilkha & Co., after a long reformatting, leaving only the name Colt to develop and sell guns on. In the twenties, the company once again fell under restructuring. It was then that the Czech company Česká Zbrojovka Group SE, a manufacturer of weapons and equipment for the army, law enforcement, hunting, and shooting sports, announced

its intention to buy the company. The final amount of the deal was two hundred and twenty million U.S. dollars, plus shares

Czech company for more than one million dollars.

Throughout the years, Colt has manufactured various pistols, such as the Colt Walker, the Colt Python, first developed in the 19th century, and the Colt M1911, which is today the oldest military pistol. Remember the first double-action revolver Colt M1877 and the larger version of the Colt M1878 Frontier? Incidentally, the latter model was replaced by the Colt M1892, loaded with the thirty-eight cartridge. Also worth mentioning is the ten-shot Gatling machine gun for the US Army, which could achieve a rate of fire of 900 rounds per minute. And the design by John Browning, who worked for Colt and developed it for the M1900 semi-automatic pistol, which later became the M1911. The police pistol is still in demand worldwide, and the production of AR-15 and M16 rifles, including the Colt Commando family and the M4 rifle. Colt had orders from Canada and England for three years, long before the Americans entered the war, making the company the undisputed world market leader. The number of employees exceeded tens of thousands. At the beginning of the 20th century, almost four hundred and thirty thousand units of the famous Browning M1911 pistol were produced. However, demand exceeded supply several times, so the US Army used the M1917 revolver model, called the Colt New Service, as a replacement weapon. During the war, the company produced 13,000 Maxim Vickers machine guns, 10,000 Browning machine guns, and another 10,0,000 for other companies. Colt was commissioned by Auto-Ordnance, the developer of the Thompson machine gun, to design and produce 15,000 of these weapons in one year.

During World War II, Colt had six hundred and thirty thousand M1911A1 pistols and many water-cooled M1917 assault rifles. In the 1960s, the company produced one of the most famous revolvers in history, the Colt Python with six- and four-inch barrels, and towards the end of the century, the Colt All American 2000 with a polymer case. And how do you explain the "longevity" of Colt revolvers, which US police have used for a century? Fad? Certainly not. Probably because these guns rarely fail and the cartridge does not "jam." And that's reliability. It's hard to believe, but the US military entered the new century with an inventory of half a million Colt semi-automatic pistols and other revolvers. One of the most popular models of police revolvers, built for multiple rounds, is the Colt Police Positive Specia. Its creators strove to make this revolver the "Detective Special" that every police officer dreams of a small revolver suitable for concealed carry and loaded with a powerful cartridge.

The Colt-Browning M 1900 was designed for the powerful thirty-eight cartridge. Unlike many other pistols, it had a detachable magazine chamber and a rigid breech block. The barrel was attached to the frame using swivel lugs located at the end of the barrel and the end of the stock. The gun barrel was held in place by pins at the end of the barrel and the breech end so that the barrel axis remained unchanged when lowered. When the sight was reduced, the bolt was locked and released; when cocked, the sight was raised, and the bolt removed. The firing mechanism was ventilated recoil. The bullet continued to penetrate up to a distance of one hundred meters. Some of the shortcomings were considered in the design of the new Colt-Browning M 1902 pistol. This pistol was distinguished by its high efficiency.

The Colt Python revolver earned the slogan: 'Colt Python is the best revolver in the world. It was distinguished by its excellent accuracy, equipped with an original aiming mechanism that could be adjusted according to distance and environmental conditions. It was made of stainless steel, with impressive dimensions, a reinforced barrel with a ventilated grip, and a cavity for empty cartridge cases. This revolver required no additional cooling, and the reinforced barrel reduced recoil. It was the only alternative to the successful Smith & Wesson 14K38 revolver.

The Colt Anaconda revolver was available in versions with a six-inch barrel. There were versions with smaller barrels for concealed carry and eight-inch barrels for hunting and target shooting. The gun weighed over a pound and a half, was thirty inches long, and used a forty-four-inch magnum cartridge, which had enormous destructive power and a corresponding recoil when fired. This revolver was a monster, not a pistol, and some models had built-in recoil compensators in the form of holes in the barrel.

Individuals make history. Colt never served in the army, but the governor of Connecticut awarded him the title of 'provisional' colonel for his electoral support. Colt was expelled from college for allegedly starting a fire during chemical experiments. While working as a deckhand on a merchant brig, he saw the ship's rudder being turned and the anchor chain being recoiled and modeled the drum of a future revolver. Colt did not take advantage of the loan and, to earn money for his business, went on tour, entertaining audiences in the provinces by demonstrating the effects of 'laughing gas' to volunteers. This probably helped him survive the competition and made him great.