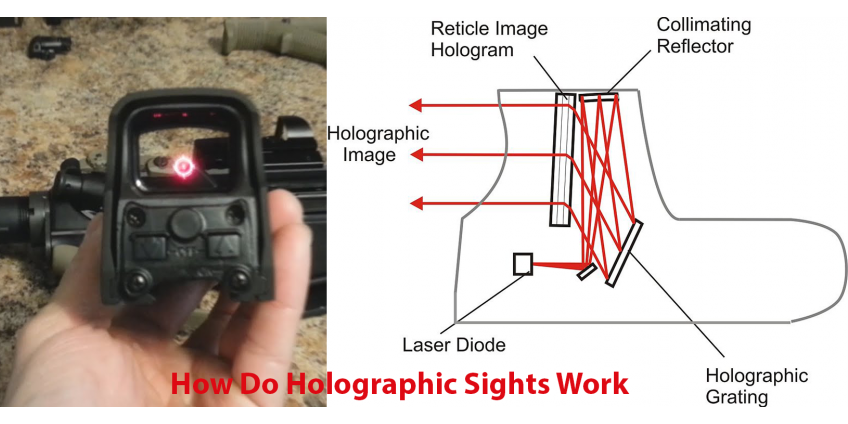 The predecessors of holographic sights are collimator-type sights, which are also a rather modern invention. The essence of collimator-type sights is that a light source in the form of a reticle (crosshair, dot, etc.) shines on the reticle lens at an angle, an aspherical reflector reflects the image of the mark towards the shooter and he sees the mark through the reflector lens. The only thing left is to point the mark at the target and shoot. Originally, the collimator sighting system did not appear in the world of firearms, but... in military aviation on fighter planes. For modern air combat conditions special collimator sighting systems and information delivery systems to fighter pilots were developed. A special transparent screen acts as a reflector of the sight, in which pilots see sighting marks and operational information. Finally, with the development of electronics, it is now possible to mount collimator sights on almost any firearm - from rifles and machine guns to pistols. Collimator sights allow for very fast aiming - 2-3 times faster than with conventional open mechanical sights. In addition, collimator sights do not obstruct part of the target, unlike mechanical sights.

What Is a Holographic Sight?

Holographic sight is a modern technology based on collimator technology, which absorbs all its advantages.

In terms of design, such sights are similar to open collimator sights. Just like with collimators, the shooter does not have to close one eye when aiming.

The field of view is large, which allows you to use your peripheral vision and react instantly to various moving targets and suddenly appearing objects.

The large and transparent mark of the holographic sight, does not overlap the target, is well distinguishable in any light level and is always fixed clearly in the center, regardless of the angle of observation. It is maximally comfortable for eyes, perfectly suits the peculiarities of human vision and does not distract the shooter. The luminous sight is only visible to the shooter and is completely invisible from the side.

How Do Holographic Sights Work?

It is an optic, at which holographic image of a sight is viewed in the output window glass, which is shown under the influence of a laser beam. The holographic sight can have various shapes, including three-dimensional. If a lens of an ordinary collimator sight, due to the presence of a reflective coating on it, does not let the waves of a certain spectral range through and therefore can change the color of objects, this does not happen with a holographic sight.

The laser is located in front of the lens window, and its beam forms a virtual sight The holographic image is clearly visible in all light conditions, always in the center of the reticle and looks clear regardless of the angle at which it is viewed. The sights usually include a power supply status display system and a system of automatic or manual change of the reticle brightness.

The holographic sight is large (usually in the size of a person at a distance of 100 m) and transparent so as not to obstruct or overlap the target, so the speed of shooting from a weapon equipped with it is much higher than when shooting with an ordinary magnified sight. As the output window of the sight is flat, the probability that the target will notice the glow of the lenses is significantly reduced. It should be noted that holographic sights have single magnification, besides all holographic sights available on the market belong to "open" type sights. Such sights allow the shooter to use them with both eyes, and since there are no parts in the sights that obstruct the view, the shooter can easily control everything that happens around him.

Pros and Cons of Holographic Sights

Let us consider the known advantages and disadvantages of holographic sights.

The pros of using a holographic sight:

● The mark of the holographic sight can have various shapes, including three-dimensional.

● The lens of the holographic sight has no reflective coating and therefore does not distort or change colors of objects, as opposed to glass of an ordinary collimator, because there lenses have reflective coating that does not let in waves of a certain spectral range.

● The property of the holographic sight is that the image of the virtual mark is infinitely far away and you can see it as if directly on the target!

● The holographic image is clearly visible in any illumination, it is always located in the center of the sight and looks clear regardless of the angle under which it is viewed.

● If the lens is partially damaged or partially soiled, the mark will be visible in the remaining free part of the screen.

● The protection of such sights is higher than that of collimator sights.

● Target and the sighting mark are located in the same plane, which excludes parallax.

● The sight glass is vertical, which excludes reflections that can be noticed by the opponent.

● The possibility to change the plates with the reticle mark is convenient in terms of multitasking and reparability.

● Weatherproof in all weather, unlike collimator sights: rain, snow, fog

● Often equipped with intelligent systems that allow you to easily adjust the brightness of the sights. In modern holographic sights, this adjustment is automatic. Thanks to this option, such a sight adjusts the brightness level itself, depending on the light level - for this purpose; they are equipped with a built-in light-sensitive element.

● The integrated processor of the holographic sight can adjust even the preemptive parameters (when the target moves) and calculate correction factors (very useful when shooting at long distances).

The cons of using a holographic sight:

The structural simplicity of "holographs" is illusory - they are made by complex technologies. The disadvantages of these sights are as follows:

● Optical viewing of the hologram can lead to "stratification";

● Strong mechanical action and overheating can affect the device.

It is up to you to decide which sight you will use during work, rest, and hobby or rescue operation. However, we hope that our article will be useful for you when choosing the right device. 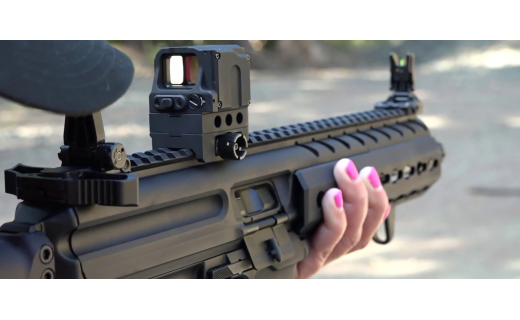 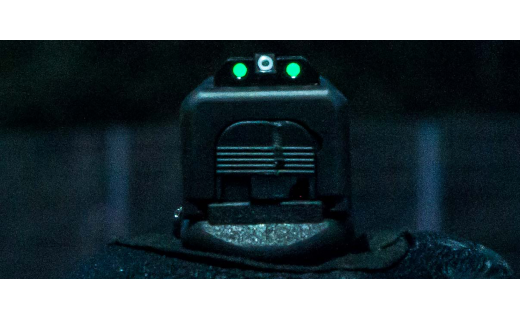 Tritium is a chemical composition utilized for night sights on handguns. These devices do carry some added risk due to the radiation component that ma..